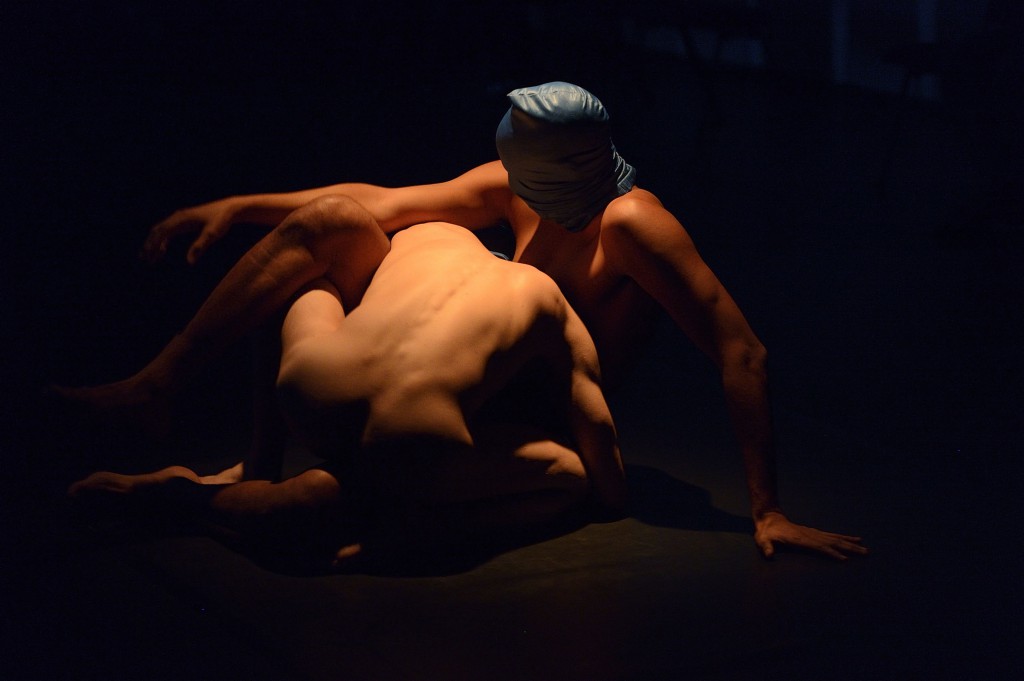 DOWN TO EARTH is a whirling dance of constructed identities shaped by increasingly complex constellations that go beyond the universal social interrogation of “where are you from?” and “what do you do?”. Existing examples of socially coded dance, music and cultural artifacts collide until alien identities are born and shattered on stage, drawing on the human body as a projection canvas. What agency do we really have in rupturing our identities? Kieron Jina (South Africa) and Marc Philipp Gabriel (Germany) work together since 2013. For “Down to Earth“ Yogin Sullaphen (South African) joins as a collaborator to assist in musical composition.

Coproduction: Tanzfabrik Berlin and University of Johannesburg Arts and Culture.
Supported by: Internationaler Koproduktionsfonds des Goethe Instituts | Dance Umbrella Festival (Johannesburg) | National Arts Festival, South Africa | NATIONALES PERFORMANCE NETZ (NPN) International Guest Performance Fund for Dance, which is funded by the Federal Government Commissioner for Culture and the Media on the basis of a decision by the German Bundestag.

„This piece is, to vary the fitting programme notes, a hybrid of cultural artefacts, socially coded dances and music, a playfully exotic dance that neither denies the desire for appropriation, transformation and identity change, nor for the fen-fire-like in-between.” (Astrid Kaminski, tanzraumberlin)

“Why is this faking of rituals, this colourful ethno-kitsch so good? Perhaps because it is made so easy to experience the seductive part of it, and because at the same time the comedy of the unsuccessful attempts at enchantment is now and then shining through, but remains unspoken. And also because the multi-ethnic globe-hopper-cast makes it clear how thin the boundaries are between expropriation, appropriation, and self-ownership in a world of mutual interdependence and influence.” (Astrid Kaminski, tanzraumberlin)

DOWN TO EARTH means basic, both feet on the ground, straight forward, exactly what is expected. No surprises please. No more than necessary, no bullshitting. Just be yourself, please, innocent like a child. DOWN TO EARTH is exactly that — and not! It is unexpectedly the expected. The descent of the strange stranger from non-earth to Earth. The alien figure within us, the reflection of what we are – not -, and what we could have been. Digging up questions like: why-are-we-like-this and why-not-like-that? This is an encouragement for collective self-analysis.

Two faceless humanoid creatures, vulnerable and bare as they are, drop down in our communal centre, the theatre stage, and proceed to take us on a bumpy road trip through the building and bursting of culture, where the distinction between artificial and real becomes blurred and dichotomies of gender, power and social norms are revealed in their threatening ridiculousness. Emptied out, we ask ourselves, is this the world we would like to be in?

Kieron Jina, Marc Philipp Gabriel (performers) and Yogin Sullaphen (musician) are using a bunch of random “man-made” stuff to summon an artificial world of creatures, cultural codes and artifacts from past and present times, touching on the nostalgia for another future and heading for a rebirth into another past.

“When you are down to earth, don’t forget to look at what’s up in the sky!” — (someone wise)

“When two hands touch, there is a sensuality of the flesh, an exchange of warmth, a feeling of pressure, of presence, a proximity of otherness that brings the other nearly as close as oneself. Perhaps closer. And if the two hands belong to one person, might this not enliven an uncanny sense of the otherness of the self, a literal holding oneself at a distance in the sensation of contact, the greeting of the stranger within? So much happens in a touch: an infinity​ of others—other beings, other spaces, other times—are aroused.” 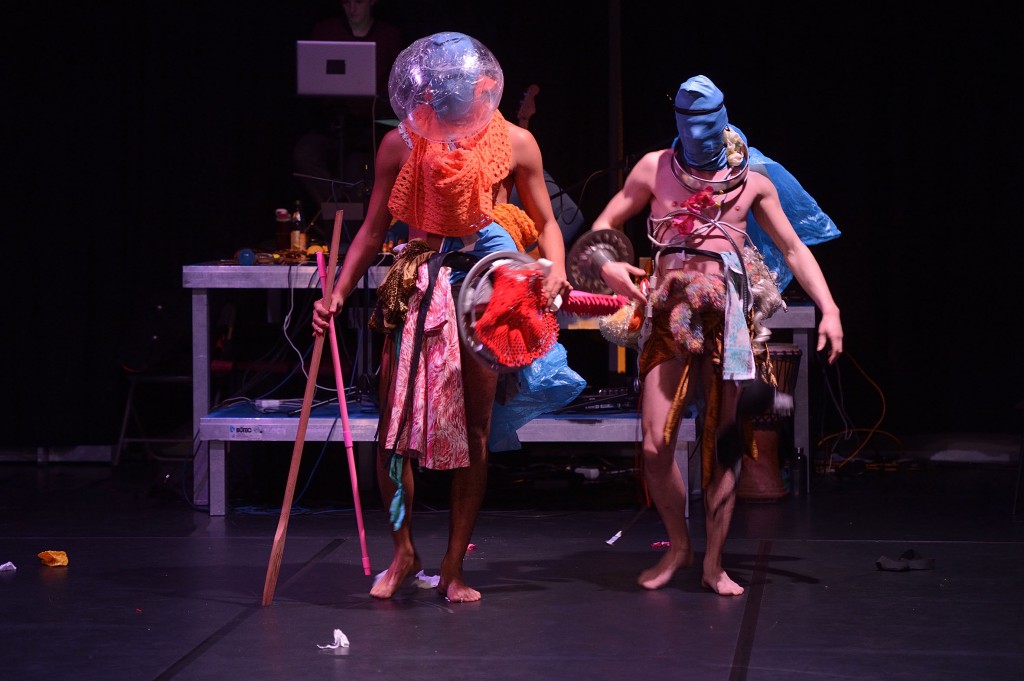 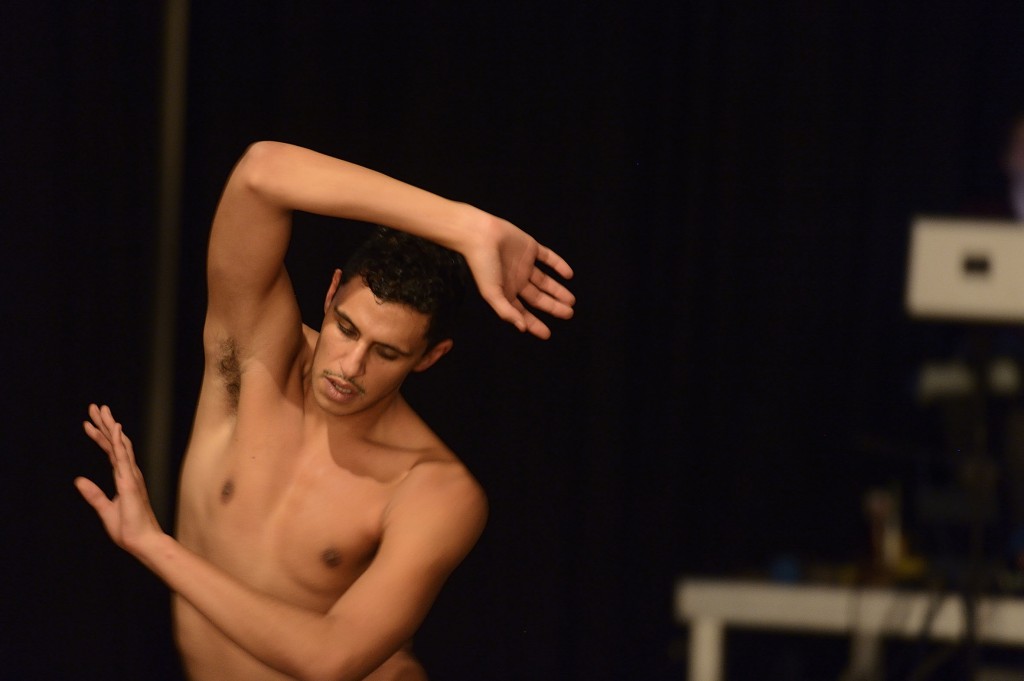 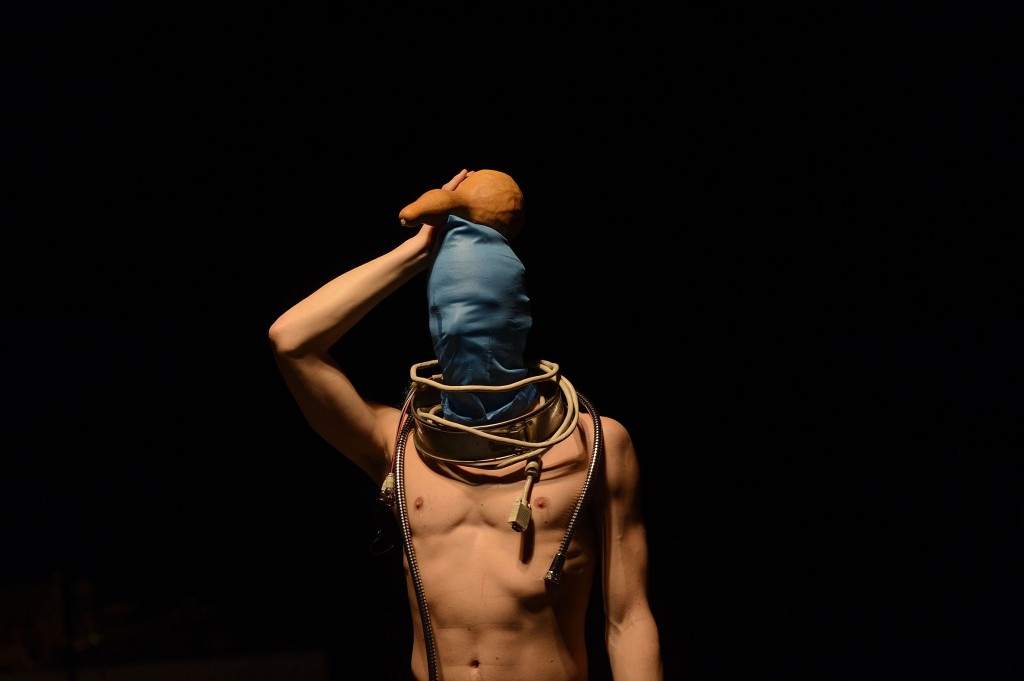