/// Scroll down for full recordings! 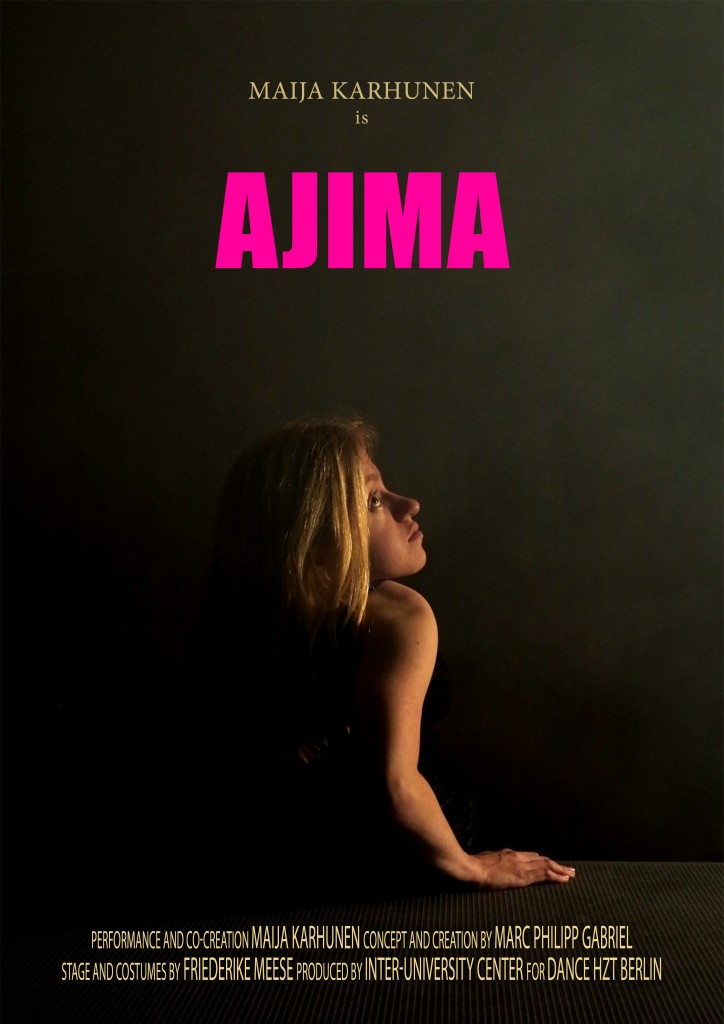 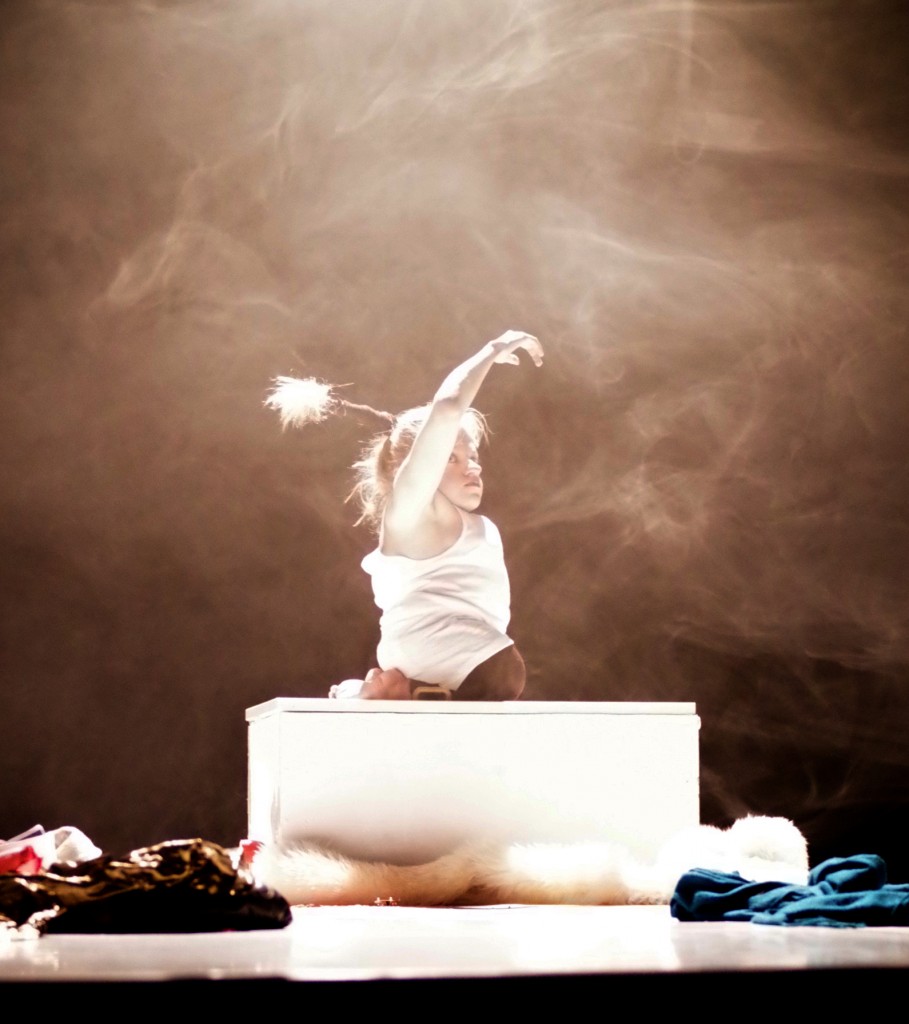 The performance AJIMA stages a character that oscillates between real and fake, private and public, quotidien and theatrical. Throughout the piece, the ambiguity of our wavering identities and roles, our assumptions on others in social interactions become a life exhibition, are cast a spotlight on, and are processed in a collective ritual. The self-referential character AJIMA is alternating and shifting between revealing and hiding, lying and telling the truth, looking and being looked at.

Scroll down for older recordings! 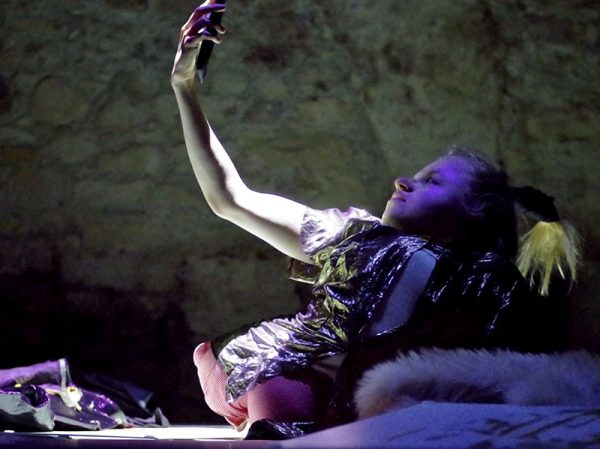 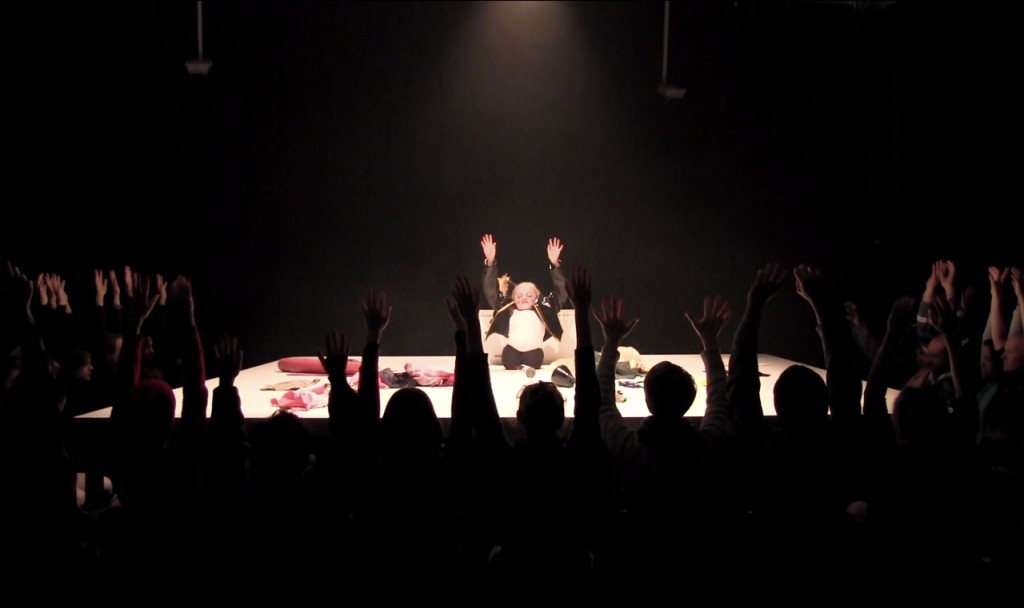 INTERVIEW with Marc on The Vile Blog for BUZZCUT (March 2016)

Can you tell me a little bit about the work that you are bringing to Buzzcut?

AJIMA is a solo for Maija Karhunen that I devolped with her three years ago. We studied choreography together in Berlin. I proposed her to stage a freakshow with her as the freak – and she said yes.

I’m lucky she didn’t call the police to arrest me instead… Maija was born with glass-bone disease and usually moves around in a wheelchair. We realised very early that my projection of a freak-show on her wouldn’t lead to anything interesting to us. Instead, we started collecting social projections that people cast on each other all the time. And in the end – we did make a flamboyant freak-show! But one that empowers the performer rather than the director or the spectator.

What is it about Buzzcut that attracted you to perform as part of it?

The philosophy of sharing and exchange is really what makes this festival special and relevant to us. Often you perform in a place and there is no time and space to engage with the surroundings because schedules and budgets are tight or just because no one has thought of exchange to be crucial to art making. I think it is essential to sustainable art making.

I’m not so much interested in selling my work as much as possible – I’m interested in engaging with the audience, with other art makers and in contributing to the discourse of future models of how to be together on (and with) planet Earth. I see it as a long term process. And I feel that Buzzcut has evolved from a similar spirit.

Buzzcut is concerned with the idea of ‘community’. Does community have a special meaning for you, and what relationship do you feel your work has within wider communities?

Communities are vital parts of society. We are losing more and more the sense of and understanding for what it means to be part of a community and how to commit. Not so much because of the much scolded digitalisation of social interaction, but because of growing anxieties and fear that neo-liberal capitalism is fuelling.

We are pushed to fear the unknown, the ominous other (I am speaking from a Western European perspective), although excluding those that are different has always proven to be a short sighted error of reason. Women, queers, “the disabled”, blacks, Muslims, the exotified, the environment, many more and any overlapping groups of these, they all had enough of being denied a voice, being dis-empowered, marginalised, alienated, suffocated.

Communities have risen to cut through to the surface and strike back to lift the oppression. My work is concerned with offering unconventional angles on things, centring the other, while targeting all kinds of alienation of past and present day Western patriarchal society. AJIMA was the first of a series of works that playfully unfolds the mechanism of social alienation.

What are you hoping that the audience will experience?

I’m hoping for the audience to catch themselves thinking in patterns that they didn’t know they were pursuing. And not punishing themselves for it, but becoming aware for who they are and what they do.

Realising if that is what they want to be. I want to instigate people to reflect on themselves and to be optimistic about what is to come.

Click here for details on AJIMA and the TRAILER…